The Brontë sisters have always been interesting to me, and their books, which have become classics in English literature, became much more interesting to me when I learned about the lives of the authors and how it informed their work.

Charlotte, Emily and Anne Brontë, along with their brother Branwell, had a very isolated childhood. They were all intelligent, creative and close-knit, and as children they developed their creativity by creating intricate imaginary worlds as a game, and creating characters and stories to fit within them. As they grew up, the imaginary worlds stayed, but instead of being a child’s game it became a literary pursuit. 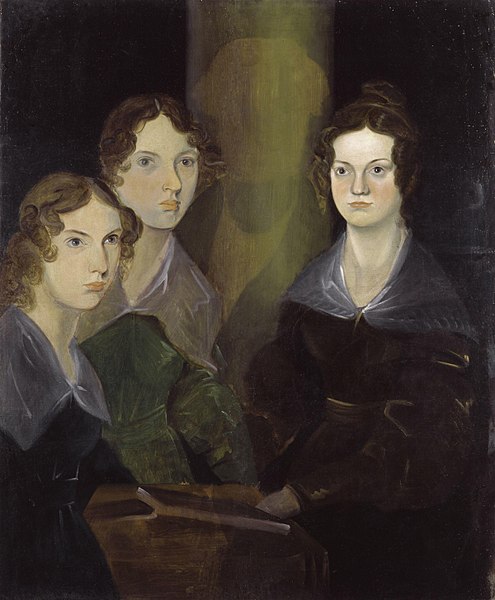 Portrait of (left to right) Anne, Emily and Charlotte by their brother Branwell

The girls wrote and published works and were relatively unnoticed until 1847. In that year Charlotte published Jane Eyre, Emily published Wuthering Heights and Anne published Agnes Grey. Themes from the girls own lives can be traced into their books, including the boarding school where their older sister died, experiences from their lives as governesses, and the devastating effect that Branwell’s addiction to alcohol had on the family. Emily and Branwell died in 1848, Anne died in 1849, most likely of tuberculosis. Charlotte lived until 1855 and then she died as well.

Each sister had a slightly different literary voice, and their published works are still famous today. Needless to say, their real lives were just as dramatic and heart-wrenching the lives of their heroines, if not more so.

The series of paintings I’ve done are a combination of illustrations of the author’s books, and a portrait based on the portrait Branwell painted of the sisters in 1834.

Emily’s only book “Wuthering Heights” is a classic in Gothic Victorian fiction, and combines a mundane portrait of Yorkshire life with extreme characters and supernatural elements. To portray this I made the painting as gothic and moody as I could, with dark contrasting colors and a focus on Cathy Earnshaw’s ghost. I also incorporated elements from Emily’s poetry, such as the hawk and the moon.

Charlotte is probably the most famous of the Brontë’s, and wrote several books after the success of Jane Eyre, where her heroines explore London and Paris. As such, I maintained a focal point in visual motifs from Jane Eyre, such as Thornfield Hall burning down. But I also included  Victorian London at the bottom and included a map that copies the maps the children made of their imaginary worlds.

Anne Brontë is the least well known of the sisters, probably because her works were the least popular. Unlike her sisters, Anne steered away from gothic mysticism and romantic storylines. Instead she focused on the gritty hardships of real life. Her first book, Agnes Grey, is about the unfair treatment governesses at the time received in Victorian society, and her second, The tenant of Wildfell Hall, is about a woman running away from her abusive husband. Besides that, her poetry is mainly religious in nature. To try and portray this and contrast her with the other two sisters, I avoided a dark color scheme. I focused on greens and blues instead of black and red. I also avoided portraying couples in Anne’s portrait, because romance is not the focus of her books and work.